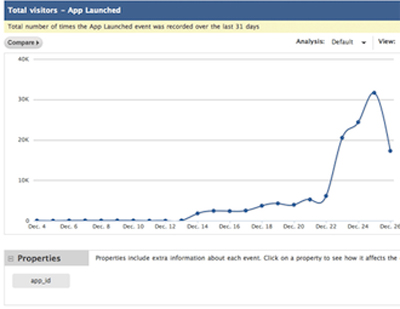 It’s beginning to look like Apple may have had a very, very merry Christmas. Not that it should surprise anyone given how many of their products were on year-end “best-of” lists. But some data that has started to come in over the past few days points to Apple’s Christmas surge once again being led by the mainstays: the iPhone and iPod touch (and probably the iPad as well).

Since yesterday, developers have been tweeting and messaging about huge spikes in downloads of their apps on Christmas. How huge? Just look at the chart in this post. We’re talking two to three times normal numbers. That particular graph came thanks to data from MixPanel, a Y Combinator startup that specializes in iOS analytics. We’ve since confirmed with the company that on the apps they track, they’re seeing the same “2-3x in app download/sales across the board.”

This data point coincides with others, such as Tap Tap Revenge 4, a game for the iPhone/iPod touch, which is seeing download traffic 2x what it was last Christmas, according to Business Insider.

Meanwhile, the site All Facebook looked at the data for Facebook’s iPhone app and also found a massive surge on Christmas. In fact, the app added some 1.6 million users in just the three days around Christmas. By comparison, Facebook for Android added some 900,000 users in the same span.

So what does all of this mean? Clearly that a lot of people got new iOS devices for the holidays and went on massive downloading binges. Apple will officially announce their holiday earnings on January 18. Expect a “boom” or two.（source:techcrunch）