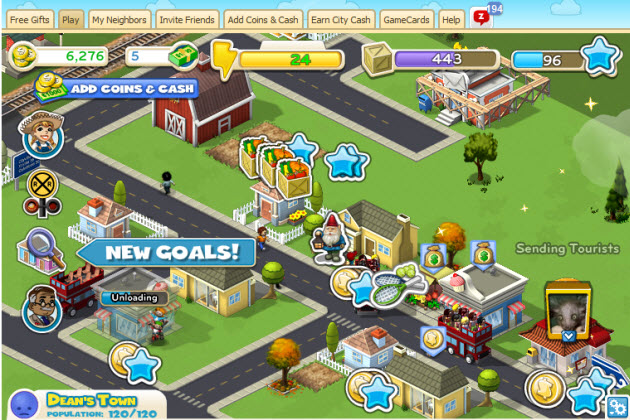 Zynga’s CityVille has become the fastest-growing game in history. And based on an interview with a key Zynga executive, that isn’t an accident. The company has all but figured out how to turn its game launches into a science, and that helps them spread to increasingly large audiences on Facebook.

The city simulation game has drawn in more than 26 million users since it debuted on Dec. 2. In just 12 days, the Facebook game has broken all previous records, adding 4.5 million users on Tuesday alone. In the past seven days, the game has added 24.9 million users, according to market researcher AppData. For Zynga, that’s important because the San Francisco company often sees big fluctuations in its player base as fickle gamers move on from one game to the next. CityVille has surpassed the initial growth wave that FarmVille, Zynga’s biggest game, saw in 2009.

“This feels fun,” said Mark Skaggs, the Zynga vice president in charge of CityVille. “It’s like reliving the fun and excitement of the FarmVille launch. We are buzzing with energy about how to keep it going.”

CityVille comes at an important time for Zynga, which is trying to show that it can keep churning out hit after hit, by following a recipe that focuses on watching its gamers closely and tweaking games so that there are no barriers for adoption. If Zynga can keep turning out the hits, it can replace lost gamers and keep a commanding lead in social games industry. According to AppData, Zynga has more than 222 million monthly active users (those who play in a month). Just a couple of weeks ago, Zynga had only 198 million users, which is far below its peak from the spring, when it had more than 260 million users. Zynga lost a lot of users because Facebook shut down some of the most popular game communications (which were viewed by non-gamers as spam).

Founded in 2007, Zynga has become one of the largest gaming companies in the world, with more than 1,300 employees. Legendary investor John Doerr of Kleiner Perkins Caufield & Byers said Zynga was easily the best investment that his firm has ever made. The social networking game maker is already the largest app developer on Facebook. And some recent valuations show that Zynga is actually valued above $5 billion, larger than Electronic Arts, one of the largest video game publishers in the world.

Zynga is trying to regain its numbers of users by expanding to other platforms such as mobile games in Japan. It is also expanding its social games to non-Facebook web sites and translating its games into other languages. The company has been buying about a company a month to get more talented game developers. But the No. 1 thing it has to do to keep growing is to commission new games like CityVille.

Skaggs said that the CityVille team was formed from scratch in the spring and that 95 percent of the people had never worked on a game before. There were a few game industry veterans who were new to Zynga, and a few crusty Zynga veterans like Skaggs, who previously developed games for Electronic Arts. The team started with established play practices that had been successful in other Zynga games, such as picking up rewards, or loot, upon achieving something. Then it focused on what would be fun to do in a city game. The result is a lightweight city simulation that can be played in a matter of minutes — but which players feel compelled to return to on a daily basis.

CityVille has 11.5 million daily active users — that’s the number that play during one day. The new game went through a slow climb in its first five days and then suddenly took off exponentially. Skaggs didn’t disclose exactly what Zynga did to make that happen. But he said the company has an established process for game launches where it turns on features that make the game more viral. It also opens up its cross-promotion and advertising spigots as well.

Other Zynga titles have taken off fast as well. FrontierVille saw a rocket ride this summer before settling at around 30.5 million monthly active users. FarmVille hit 83 million monthly active users this spring and is now at 55.3 million. Skaggs said that FarmVille had a tougher start because the development team itself had to watch the computing infrastructure and make sure that the growing load wasn’t too much for the servers. That meant that nobody slept. Now Zynga has a team dedicated to managing the load.

On the surface, the game resembles SimCity. You run a town, building homes and stores and roads. Your friends can help your town thrive by visiting your stores and working as staff in your city hall. You can also set up franchises of your own in the towns of other players. In that sense, CityVille is far more social than the original SimCity titles. Skaggs said the vision was to create a game that felt like you were actually controlling a city in real time.

But everyone knows Facebook has its limitations. The game does not reproduce the kind of sophisticated 3D graphics animations that disc-based games such As SimCity can do.

And while CityVille has some interesting new game play, you can’t really say that it is original. There’s a whole genre of city games on Facebook, including Digital Chocolate’s Millionaire City and its sequels. Playdom’s Social City was also a hit at one point. But CityVille has already eclipsed those titles. Now it has to prove that it’s not just a fad. Zynga’s game designers are hard at work on increasing engagement, or the amount of time that users spend with a game. If a game is more engaging, it can generate more audience loyalty and eventually lead to better revenues. Zynga games are free for users to play but they generate money when users pay real money for virtual goods.

Zynga had previously said that the game took off faster in a single day than all of its previous games, getting 290,000 users in its first 24 hours. Zynga also launched the game in multiple languages at the outset so that it could grow in multiple regions at once. The game was almost ready to go on Nov. 16, when Zynga briefed the press about the game. But Skaggs said the company held back the launch because it needed to fix bugs and polish it. The team had released the game to all Zynga employees, who discovered things that the team had to fix before moving forward. That delayed the game a couple of weeks. By Dec. 2, at 1:22 am, Zynga opened up the game and the staff drank champagne.

Since the launch, Zynga has made some significant changes to the balance of the game and released a lot of new items and buildings. There have been a couple of small outages, but nothing major that has interrupted the addition of new players. (Source : Venturebeat)