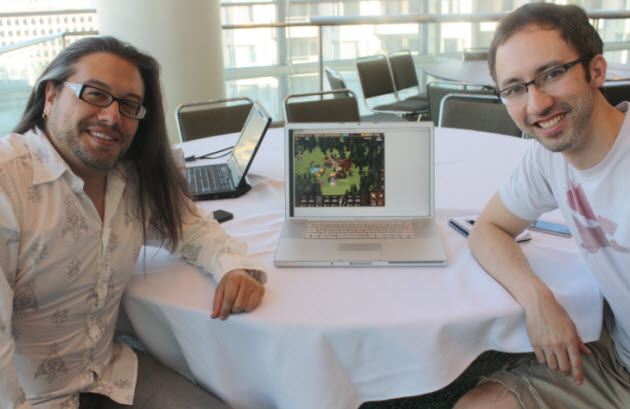 The most exclusive game on Facebook is also the most lucrative and intense: the game design of the games themselves. For designers in the space, particularly those from the traditional game industry, game design has become its own game, complete with a leaderboard.

“Every night at midnight, I check AppData,” says John Romero, a veteran video game designer, consultant and lead designer of Ravenwood Fair. The site has become a de facto leaderboard for many developers, backed up by weekly top games lists.

Imbued by a deep love of game play, many designers view social game design, and the competition it creates with other designers, as a real-time strategy game, complete with in-depth stats and armies composed of coders, artists, animators and product managers. Indeed, our ability to respond to the current state of the game — both the actual game on Facebook and the larger meta game of game design — is critical.

Don Daglow, another veteran game designer, watches the numbers like a general. “Social game design is unique,” he says, “because you get a score for every facet of your performance every day. It’s like SEO on speed. How many first-time players came back the next day after the latest tutorial tweaks? What’s our DAU? How is monetization changing since we adjusted item prices? Did the test players like the new gorilla suit costume? All of business is a game, but the social games business has 24-hour scoreboards on every corner.”

As much as we respond to the player behavior in our games, game designers also must respond to the other “players” in the meta game of design, too. If one player makes a move, invents a particularly clever tactic or introduces a new mechanic or theme, the other “players” respond accordingly by trying out the move themselves, watching their ARPU or doing recon behind enemy lines. The mass proliferation of games about farming, cooking, and running resorts serve as perfect examples.

The idea of game design as a game in itself first occurred to me in an active, front-of-the-brain kind of way when I was on stage at this year’s Game Developer’s Conference in San Francisco with fellow game designers Steve Meretzky, VP of game design at Playdom, Brian Reynolds, chief game designer at Zynga, and Noah Falstein, president of The Inspiracy. We were there to talk as video game veterans who had entered the social game space. As the room began to fill, we talked of the things we’ve talked of for the decades we’ve known one another, but there was something else there, too: a new gamestate between us.

Brian was the obvious current leader at Zynga, and every day, his numbers just kept rising. As we talked of the games we were working on, our numbers and, in a veiled way, our future plans, it quickly became apparent that our conversation had all the earmarks of hardcore board game players yapping about their current gamestate while keeping their next move carefully guarded. That we four actually do regularly play board games together made the comparison all the more obvious, amusing and interesting. “Finally, game design is a game,” I said to the audience. It was promptly tweeted and retweeted dozens of times.

Says Falstein, “I look at my design job partly as a social status issue with my fellow designers. I want to improve the best of their games’ features while adding my own innovations, thereby earning status points at our next board game party, as well as earning RMT equivalents for my client – and therefore, me too.” Meretzky even jokingly alluded to the resource management that happens behind closed doors. “I beg my co-workers for resources. After asking four or five times, I often have everything I need to complete a task!” The rush and instant feedback is particularly exciting for game designers entering the space after years in the traditional AAA console game industry.

“Good games have regular feedback loops and social game development has these in spades,” says John Passfield, creative director at 3 Blokes Studios. “The majority of time in traditional game development is spent building a game behind closed doors which is more like training for the Olympics. Whereas social game development puts you smack in the middle of a full season where you’re constantly adjusting your game by listening to your coach (product manager), watching the other team and playing to the fans. It’s about being in the moment, not preparing for the moment.”

That moment, that hour and that day, each allows for iteration and tweaking of the meta-game state and a hopeful resultant climb in DAU. Quick to compare it to his own game, Reynolds said, “Every week I  harvest my features and plant some more, and then we run around collecting all the doobers!”

From a game designer’s perspective, it is a wonderful, exciting time to be a “player” in the game of game design. The play space feels wide open, like a game of Civilization Revolution only a few minutes in, with lots of room to explore and many things to discover. Games are being made with small teams about unique topics for new audiences, and in many ways, say the game industry vets, it feels like 1981 again. It is good, too, that we remember 1983, the year of the North American video game crash, and can adjust our strategy accordingly. （Source：Inside Social Games）