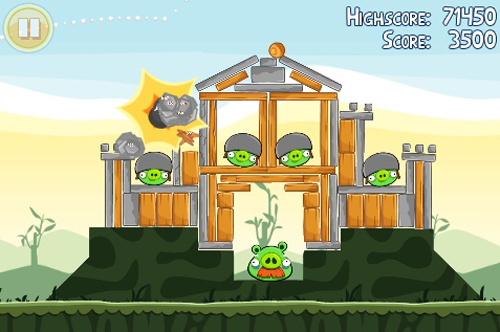 In an on-stage interview at Le Web 10 in Paris, Rovio CEO Mikael Hed talked about one of the most popular games ever to hit mobile phones all around the world: Angry Birds.

What’s the story behind Angry Birds?

It started off with a screenshot from one of our game designers. He drew a picture of some really angry-looking birds. He explained the game mechanics behind his idea. I didn’t understand any of it, but everybody really loved the characters, so we started developing a game around it.

We’ve sold 12 million copies of Angry Birds to date, and we’ve seen about 30 million downloads of the free app. The majority of revenues comes from the iPhone, and a lot of that is from advertising.

Did the success of the advertising model take you by surprise?

We had a pretty good idea of how well it could do, but I do think the future will hold many more apps that will be getting most of its revenue from advertising. It’s just a great way to capture users for the long term.

On the iPhone, the commercial model works really well – there’s only one shop, you have to register for iTunes, everyone can buy, etc.

There’s been quite a bit of talk about the Android version, about the severe performance issues and so on. Can you talk a little about that? Is Apple right in saying that there’s a huge fragmentation problem? Is it a big issue for you?

Not too much, we’ve done a lot of games in Java over the years, so we’re good at porting our games. It’s familiar to us. But it does take manpower to do it, and in some cases we can’t support all the handsets, because of their respective specifications.

Is it mainly the hardware, or which version of Android the handsets are running?

Everything Android 2.0 and upwards is really good.

What about some of the other platforms? Windows Phone 7 for example?

We’re actively looking at WP7, we have a very good relationship with Microsoft. They just announced our game for the platform a bit ahead of schedule.

What about the Chrome web store?

Chrome is very interesting, and we’re looking at that also.

Would that be an advertising-driven model as well?

It remains to be seen how wide the payment coverage is, but I must say the revenue split is very interesting.

It’s an interesting time to get on Facebook, so we’re definitely looking at that.

We were introduced to a licensing agency early on, and we thought of ways to use the brand for other things like merchandise. The results so far have been very encouraging.

We’re actually waiting for more toys to arrive from China, and we’re already selling inventory that will only arrive in January or even February 2011.

What’s next for you guys?

Next year, we’ll be moving to consoles. It’s a more traditional business model, but we’re interested in the downloadable games aspect of it. We’re building our back-end system now that will

allow people to play the same game from different devices.

There’s also talk about a potential movie deal. What’s the status on that?

We have looked very closely at that, but the issue is that it would take about 4 years for the movie to come out. We could essentially do it anytime, but we’re focused on smaller screens right now.

Is there another game you’re working on?

At the beginning of this year, we were 12 people, 40 now. All of our manpower has gone to Angry Birds so far, but we’re working on new titles, that may or may not be Angry Birds related.（source：techcrunch）