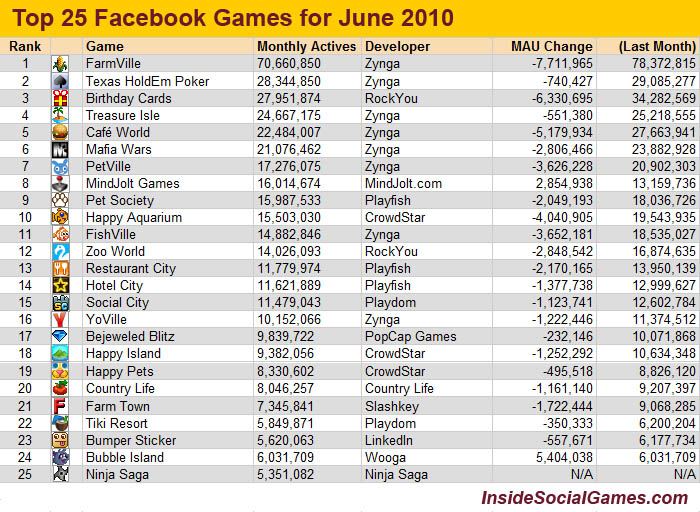 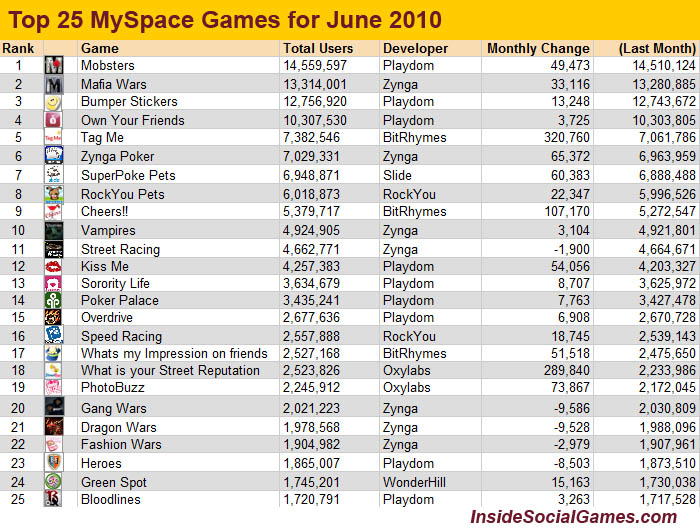 More than half of the 25 largest games on Facebook lost users in April, but the trend picked up last month.

Is the Facebook platform collapsing? That’s not what the data is showing. Social game developers of all sizes continue to see growth (check out our weekly top 20 lists for more on that).

Why, then, are so many of the largest games losing so many users? One reason could just be age. Almost all of these apps were launched last year. Game lifespan varies depending on genre, quality, the number of updates, and other factors — and some of these titles, like Restaurant City and Farm Town, are more than a year old.

But another factor is obviously Facebook’s removal of notifications at the beginning of March. That channel was a key way that most games grew and maintained user engagement last year. Facebook removed the channel because so many developers used it so aggressively that it became filled with spam. With each change in user communication, developers have to adapt their game design – but it’s often hard to prevent at least some period of traffic loss.

What’s left for developers? Organic growth through news feeds, email and the soon-to-change requests features — and advertising and cross-promotion.

These channels provide slower growth, but are also harder to spam; send too many emails to a user about a game and they’ll filter out the sender.

Facebook’s platform has gone through jarring realignments in the past, and developers are once again searching for new ways to build their businesses. We expect they’ll optimize successfully now, despite the losses.

However, one jarring note is that Playfish’s Hotel City, Playdom’s Social City and Zynga’s Treasure Island — three new hits from the three largest social game developers on the platform — are also registering declines. Because these large developers depend heavily on internal cross-promotion, network-wide traffic declines are also impacting their new app growth. This is also likely driving up the cost of paid acquisition, meaning we could be seeing decreases in the cost-effectiveness of that channel as well.

While Facebook’s Top 25 may be suffering significant losses, the often under appreciated MySpace platform continues to see its gradual growth. Unlike their Facebook counterparts, the various social games, or game-like applications, on MySpace have historically grown little by little every month. However, beyond core interface changes earlier this year, the social network has never really provided as many ways for games to grow as Facebook. It also hasn’t created a constant stream of changes that have hindered it either.

The numbers might be less, but considering that almost every single title on the Facebook Top 25 for June saw a massive exodus of monthly active users, the stability of MySpace is certainly a god-send for some. Moreover, with the network’s new iPhone and Android SDKs, with MySpace Co-President Jason Hirschhorn’s comments at the TechCrunch Disrupt conference about new products coming this summer and a “massive” overhaul this fall, it will be curious to see how this historical stability holds up.